Jerry and I met in 1998, when we both auditioned for the Troupe, and immediately bonded when we learned that we were next door neighbors in New York and had both previously lived in Westchester, where he had played Luiz in a production of The Gondoliers, which I happened to have seen. We were equally delighted to sing in the chorus of the BHT’s 2000 production of said opera and other Spring Shows. Jerry was also active in concerts, where he often had solos, and was happy to be my escort home from rehearsals and social events. After he hung up his performing shoes, he continued to be an active Trouper and was for many years a fixture in the ticket office.

An attorney by profession, Jerry had sung in a number of Westchester choral groups, and in later years, was a devoted and beloved member of Vocal Ease, a New York City organization which provides live entertainment for senior citizens in hospitals, nursing homes, senior centers, and senior residences.

Jerry and his late wife, Paula, enjoyed good food and travel, as well as their children, grandchildren, and a series of grand-dogs. A kind and generous friend, Jerry is missed by all who knew him. 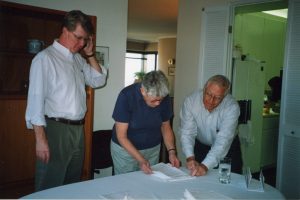