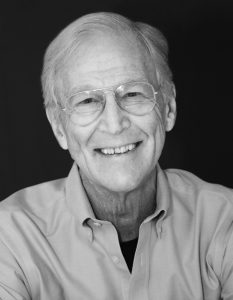 I met Sandy Kennedy almost 40 years ago. I leaned on him and enjoyed his company—chatting, sharing, laughing, crying. He was a loyal, dear friend. Those of you who knew Sandy understand the sadness I felt when his son, Tommy, told me he died, on August 7, 2020.

Sandy was born and raised here in New York City and spent summers in Maine. He was the son of Moorehead and Anna Kennedy. Even as a child, he studied acting and singing, and, as many members of the Blue Hill Troupe know, played Louis, the son of Anna in The King and I, on Broadway. Academics were very important to Sandy’s parents, his siblings—Maisie, Mike and Peggy—and to him; he attended some of the top schools in the country, including Buckley, Groton, and Princeton, and achieved an MBA at Wharton, leading him to pursue a career in banking.

A true Renaissance man, Sandy, throughout his life, enjoyed not only being on the stage and attending theatrical and musical performances, but traveling and the outdoors, sailing, hiking, and even roller skating with his children, Anna and Tommy, whom he dearly loved.

I have never known anyone with more interests, stories of travels, and varieties of experience. After college Sandy served on active duty in the US Navy during the Viet Nam War, before he became a banker with Morgan Guaranty Trust Company, helping them establish a bank in Milan, Italy. When he returned to the US, he spent time and due diligence as a recovering alcoholic. He loved and practiced the life lessons he learned in recovery. He began living his life one day at a time. His joy in sobriety motivated Sandy to become a substance abuse counselor at Freedom Institute, a career he truly enjoyed.

Sandy developed even more interests. He rode his bicycle, he joined a naturist club in New Jersey and enjoyed the lifestyle and friendships he made there. He practiced yoga and meditation. Many Blue Hill Troupe audience members remember the headstand he did on stage during one of the productions. Sandy loved the Blue Hill Troupe and became its President in 2002.

How to summarize the life Sandy led? He studied, he sang, and he led a healthy, exciting life. He was curious to learn new things, go new places, meet new people, and try new adventures. Most of all he loved and was loved. With a tear in my eye and a smile on my face, I now end my telling you about our dear friend, Alexander “Sandy” Kennedy.