Nina was born in Philadelphia, PA, and attended Germantown Academy, Trinity College in Hartford, CT, and earned her MBA from the Wharton School of the University of Pennsylvania. She began her career in corporate bond sales at Lehman Brothers, where her success made her a role model for young women in the world of finance. Nina rose to become a Managing Director, an extraordinary accomplishment for a woman at that time. Following her retirement from Lehman Brothers, she was a consultant for the Rockefeller Foundation.

But there was much more to Nina’s life than work. She had a lifelong love of music. She starred in college musicals such as Kiss Me, Kate and directed the Wharton Follies. In 1979 her strong soprano voice was a welcome addition to the Blue Hill Troupe’s ensemble. After moving to Princeton, she became a member of the Princeton Symphony’s board, where she founded the Pops Series, which remains one of the highlights of Princeton’s music scene. Nina also joined the Westminster Choir College Dean’s Advisory Council, focusing on strategic planning. She created the Philip A. Campanella Memorial Scholarship as an endowment to support Westminster Choir College undergraduate voice majors with a minor in musical theater.

Nina also sat on the board of Andalusia, the Biddle family’s ancestral home north of Philadelphia, and contributed greatly to preserving the house as a museum. She took pride in assisting with the upkeep of the property, with its extensive gardens, as well as preserving records of her family’s genealogy. Nina was also an athlete: an accomplished figure skater and tennis player who loved to ski, ride, and hike the mountains of Colorado and Wyoming.

Above all, Nina was known for her generosity, infectious humor, and loyalty. She often remarked that her friends were a prism: they reflected the many facets meaningful in life. Nina always added that her greatest joy and accomplishment was her daughter, Alexandra. 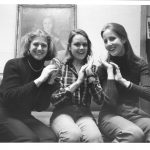