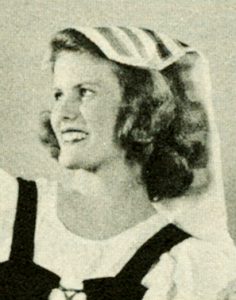 The Troupe’s longest continuous member, Margaret Ritter Nicholas, always known as “Gretchen,” died on December 7, 2019 at the age of 104. Gretchen joined the Troupe in 1939, when she was married to Graham D. Mattison, who had been a Trouper himself, performing in our productions in 1931 and 1932. She first appeared on the Troupe stage as one of the Contadine (pictured here) in our 1940 production of The Gondoliers. She continued to sing in the chorus of the Troupe’s shows in 1941, 1943, 1945, 1948 and 1949, when her final Troupe performance was as a Rapturous Maiden in our 1949 production of Patience. Gretchen remained a member of the Troupe for the rest of her life, which I believe qualifies her for a record of 80 years of Troupe membership. She continued to support our performances until she was physically unable to do so. 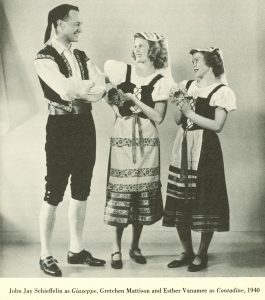